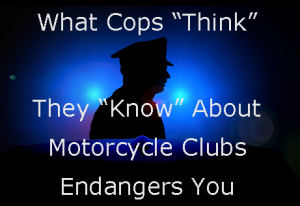 First off, all cops start of like the average Joe Blow on the street who has been inundated with biker movies and TV shows over his or her life.  And as I say repeatedly the entertainment industry does not care anything about the truth.  They care about one thing, making money.  If our way of life suffers, so be it, from their perspective!

The main way that cops learn about MCs, the popular, sensationalized moves or tv shows based on the biker or outlaw biker theme is really a rehash of the old cowboy movies and TV shows of the 1950s and 1960s.  In those old shows Hollywood made it stupid easy to tell the good guys from the bad.  The good guys wore white hats and/or a badge (probably both) and the bad guys wore black hats and probably black leather as well.  Each action-packed movie or TV series episode guaranteed that there was going to be at least one bar fight and a shootout, and the “good guys” always won.  Take note and you will see that the main educational device for educating law enforcement, the movie or TV show follows the same recipe.

Those who grew up with this kind of programming easily accepted that bikers in their black leather, tattoos and loud motorcycles were the bad guys, and once they grew up and became cops they got their badge and the die was cast.

As such the mindset of the cop was set and then it is perpetuated by the training that cops get for the most part.  They see every biker with an MC patch as a bad guy and they feel entitled, even obligated to harass us.  Most have no idea what the difference is between a 1%er MC and an Outlaw MC, or even a riding club.  Some are so uninformed that they go after ma and pop riding clubs like HOG (Harley Owners Group).

It pays for them to think this way.  It simplifies things.  The typical cop doesn’t have to think too much.  They can just go along with the Hollywood stereotypes.  As a result, they don’t have to try so hard.

The cop that does decide to apply some self-initiative and attempts to “learn” a bit more about MCs is likely to read books like “Under and Alone” which was written by a cop.   Or, another popular book, No Angel, also written by a cop.  Both are each another cop worship book where the cops promote themselves while demonizing MCs.  So. cops wind up reading cop worship books which reinforce their own beliefs, biases and ignorance.

Cops love to do this.  Play themselves up and put the bikers down.  Turn themselves into angels and us into demons.  They exaggerate the “drugs and violence” and give themselves awards, recognitions, medals and help themselves up the latter of success and generate greater budgets for their departments.

There are also so-called experts on the biker and MC community that provide “training” programs for law enforcement, which are so inaccurate they make me laugh.  Many of such reports can be found on the Internet, complete with pictures of patches, tattoos, along with all kinds of maps and self-serving statistics.

In truth, yes, some members of MCs get into trouble with the law.  But the vast majority of these MC Brothers are not into the club to make money.  AND, the money that MCs make are more likely to go toward raising money for kids or veterans’ issues.

Keep this in mind when dealing with every kind of law enforcement personnel.  In their minds they have already convicted you and will treat you like a criminal. Always be on your guard when dealing with cops.  Know that they will lie to you and try to provoke you.  Avoid cops in any way that you can, never believe or trust them.  Be smart.